The countdown has started: one more month until EuroPride Vienna 2019!

1st to 16th June: up to 1 million visitors expected at more than 50 events

The eyes of the whole of Europe will be on Vienna during the first two weeks of June, when EuroPride 2019 takes place in Vienna. As a major event for the pan-European community of lesbians, gays, bisexuals, transgender, intersexual and queer people (LGBTIQ), it promotes human rights, acceptance and love across all borders. At more than 50 events throughout the city with up to one million visitors, it ensures the visibility of the LGBTIQ community under the motto “together & proud”.

“50 years ago, LGBTIQ people defended themselves in a New York scene bar called ‘Stonewall Inn’ against one of the then usual arbitrary police raids. This was followed by a street battle that marked the birth of the modern LGBTIQ movement around the world,” explains Katharina Kacerovsky, CEO of Stonewall GmbH and EuroPride organiser. “50 years of resistance, solidarity and cohesion of our community all over the world. Today, the Pride movement is one of the strongest in the world. This year the whole of Europe will unite for EuroPride 2019 in Vienna and take to the streets for love, respect and equal rights. Tens of thousands of Europeans are looking to Vienna and a sign of progress would be particularly good for Austria’s reputation at the moment”.

And this is what the EuroPride team has worked hard to achieve: The more than 50 events are as varied as life itself: From a family day at Schönbrunn Zoo or the EuroPride Beach Day at Hermanns Strandbar to the EuroPride Pool Day at Schönbrunnerbad to theme-specific museum exhibitions, the EuroPride Concert or the EuroPride Wedding Day at Le Meridién, there is something for everyone. The three-day EuroPride Conference, under the patronage of Federal President Alexander Van der Bellen, will be the heart of the event contentwise, discussing the economic importance of Pride as well as LGBTIQ human rights and current issues. The highlights will be the two tent cities, the EuroPride Village on Rathausplatz and the EuroPride Park in Sigmund-Freud-Park, the running event “Pride Run” and the Rainbow Parade on 15th June, which runs around the ring against the direction of traffic. Due to the expected record of well over 300,000 participants, the start time had to be brought forward to 12:00 p.m. so that all 108 entries can participate.

Moritz Yvon, Chairman of the Homosexual Initiative (HOSI) Vienna, confirms: “The Rainbow Parade is the largest political rally in Austria. One reason for this is that not only LGBTIQ people take to the streets, but all people who work together with us for human rights”. But there is still much to do, and some of it would even be easy, according to the LGBTIQ representative: “The last Minister of the Interior has ensured that same-sex couples cannot marry if one of the two partners comes from a country where this is not yet possible. He has also ensured that intersex people can only have their actual gender entered in their ID cards under harassment. I very much hope that the new Minister of the Interior, Eckart Ratz, will correct this.”

Conchita: The pictures will go around the world

Fighting such discrimination, in Austria as in the whole of Europe, was the reason why HOSI Vienna applied to the European umbrella organisation EPOA (European Pride Organisers Association) for the holding of EuroPride and brought it to Vienna. But also to bring people together and strengthen each other’s backs. With this in mind, Conchita Wurst, EuroPride ambassador and artist, says: “I am proud that this year we will be able to welcome hundreds of thousands of people to EuroPride in Vienna, because the images of a common, peaceful and relaxed coexistence in our beautiful city will go around the world. I’m really looking forward to two weeks of rousing attention for our community, in which there will be countless other highlights to celebrate in addition to the EuroPride Parade”.

Vassilakou and Czernohorszky call for real protection against discrimination

The City of Vienna is a strong partner of the LGBTIQ community and EuroPride.

“I am looking forward to the visitors of EuroPride and welcome everyone to Vienna. I am very proud that Vienna will be hosting EuroPride. As deputy mayor of this cosmopolitan, young city, however, I am saddened that Austria is only in the centre of the European field when it comes to legally anchored protection against discrimination. The federal governments of recent years simply did not want to implement this. That is shameful. The new federal government is only one day old. If it wants to, it can bring Austria to the top of Europe before the general elections – Vienna is already there waiting,” said Deputy Mayor Maria Vassilakou.

Anti-discrimination City Councillor Jürgen Czernohorszky emphasises: “The fact that EuroPride will take place in Vienna this year is a great honour for the city and in particular also a sign of the strength and vitality of the Viennese LGBTIQ community. As Austria’s rainbow capital, the City of Vienna stands side by side with the community and together we are looking forward to welcoming Europe to Vienna.”

You can use the material made available here free of charge for editorial purposes in connection with EuroPride/Vienna Pride. The photos must be marked with the copyright notice indicated in the file name. Permission is required for any further use e.g. for commercial purposes or in social networks. We ask print media for a specimen copy, electronic media for a short notification with a link to the publication. The photos can be enlarged with one click. 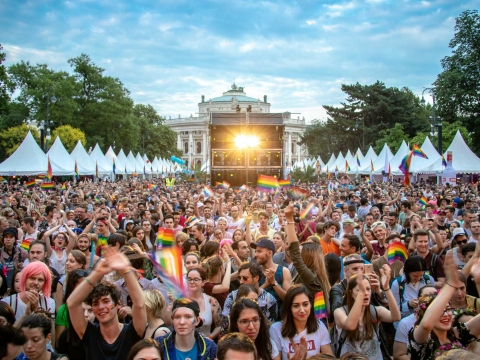 The countdown has started: one more month until EuroPride Vienna 2019!